Can’t take the heat? We need a universal measure on temperature

Which weighs more: a kilo of cheese or a kilo of Vegemite? Surprisingly, the answer depends on where they come from.

The science of measurement has a communications problem: how do people agree on how much they are talking about?

Historically, things were measured by convenient but variable references, such as the width of a thumb (an inch) or a foot (a foot) – no doubt responsible for many an ancient argument.

Resolving the ambiguity inherent in these rough rules of thumb became important enough to medieval commerce that the Magna Carta – apparently catering to inebriated textile workers, and now celebrating its 800th year – required that:

(35) There shall be standard measures of wine, ale, and corn (the London quarter), throughout the kingdom. There shall also be a standard width of dyed cloth, russet, and haberject, namely two ells within the selvedges. Weights are to be standardised similarly.

During the scientific and industrial revolutions, increasing demands for precision and standardisation in science, mass-production and global commerce lead to the development of the metric system, based on units like the metre, kilogram and second.

This system became the bedrock for the modern scientific edifice, enabling people to quantitatively study phenomena such as gravity, electricity or temperature, for which there are no convenient, everyday references.

A reference to measure

Standard units were originally defined by a reference artefact. For instance, a platinum mass in Paris defines the primary kilogram, with derivative secondary copies stored in various National Measurement Institutes.

But there remains the problem of reliably distributing the standard. For example, when primary and secondary kilogram masses are periodically compared, they differ slightly. Since National Measurement labs legally define measures within their jurisdiction, a kilo of French cheese is currently a microgram lighter than a kilo of Australian Vegemite!

To fix this problem, scientists have been working to redefine the system of units in terms of universal constants, such as the speed of light, the frequency of certain atoms, or the electrical resistance of quantum devices. This program is more or less complete for time, length and electrical charge.

Others, such as mass and temperature, still rely on artefacts. The Kelvin unit for temperature is defined in terms of “Vienna Standard Mean Ocean Water”, specially prepared by the International Atomic Energy Agency. In the current ITS-90 temperature scale, the triple-point (where liquid, solid and gas phases coexist) of this peculiarly named water defines exactly 273.16 Kelvin (0.01℃).

A universal measure of temperature

Internationally, there are various approaches being pursued to redefine the Kelvin in terms of universal quantities. 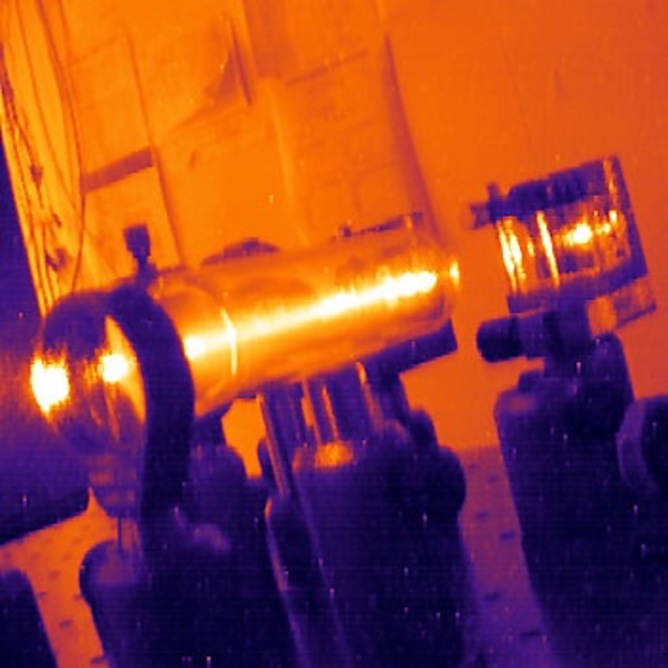 Our approach, published in Nature Communications, is based on Doppler spectroscopy of Caesium atoms in a low pressure vapour at room temperature. An example of the Doppler effect is the audible change in frequency of a police siren as it passes by.

Atoms in a gas are zipping around, and the higher the temperature, the larger their typical velocity.

Using very precise lasers we were able to measure the Doppler frequency shift of the atomic spectrum, from which we determine the atomic velocities – just like a traffic cop at a speed trap measures vehicle speeds with a Doppler radar gun.

From the atomic velocity (v), we calculate the temperature (T) of the gas using the formula (right; m is the atomic mass and k is Boltzmann’s constant).

Importantly, there are no unknown calibration factors in our technique; we rely only on universal constants such as the atomic mass and the speed of light. So with sufficient technical skill, any lab – whether on Earth or in the Andromeda galaxy – could replicate our experiment; no reference artefacts required. Even better, our approach scales over a large range of temperatures, from well below freezing to the interior of furnaces.

One of the challenges of this technique is that the laser light used to probe the atoms also changes their internal state, even for extremely low power lasers. Just as motorists become agitated after spotting a speed radar, so the atoms in our experiment become excited by the light used to measure them.

The change in the atomic state is small – just one part in 10,000 – but this is large compared to our target accuracy of one part in a million. Fortunately atoms of the same Caesium isotope are all exactly alike, so we can account for these small changes using quantum theory to dramatically improve our measurement performance.

Getting our system of units right is critical: it is the foundation on which science and technology are built. Upgrading the Kelvin definition will require backward compatibility with the current system, and pursuing several different experimental avenues will ensure we get it right.

As with any upgrade, this one will be deemed successful if the public hardly notice the transition. But to those at the cutting edge – whether developing high-temperature materials processing, studying the cosmic microwave background or making ultra-cold quantum gases – basing the Kelvin on universal and fundamental principles will enable the most rigorous tests of the universe.

This article was originally published on The Conversation.