Australia set to help solve the biggest mystery in the Universe

We may still be in the dark about what dark matter is, but we have a better idea about what it isn’t.

The ORGAN Experiment—Australia’s first major contribution to dark matter detection—is now fully online and searching for dark matter, bringing us a step closer to solving one of the biggest mysteries of the Universe.

Hosted at The University of Western Australia’s Quantum Technologies and Dark Matter Laboratory, ORGAN has completed its first substantive search for axions—a promising candidate for dark matter—after four years of research and development.

UWA PhD student Aaron Quiskamp, from the ARC Centres of Excellence for Engineered Quantum Systems and Dark Matter Particle Physics, said the first results from ORGAN rule out a popular theory about the nature of dark matter, narrowing the possibilities for what it could be.

“We performed the most sensitive search so far for axion dark matter in a theoretically well-motivated mass range,” he said.

“It’s also given us useful information about what axion dark matter isn’t, which tells future axion searches across the globe where not to look.”

Dr Ben McAllister, a physicist at the ARC Centres of Excellence for Engineered Quantum Systems and Dark Matter Particle Physics, said the nature of dark matter is one of the biggest mysteries in the Universe, and with ORGAN up and running Australia is now a major player in the quest to solve it.

“We’ve known for about a century that we’re surrounded by an enormous amount of invisible stuff called dark matter, but we don’t yet know what it is,” Dr McAllister said.

“There are lots of experiments around the world testing different hypotheses—we’re trying to rule out all the possible candidates, and by the process of elimination figure out which one is correct.

“Because we don’t know how heavy the axion is (if it even exists), we need multiple experiments searching the different mass ranges predicted by the theory.

“The ORGAN Experiment is the first demonstration of a type of detector called an axion haloscope in this particular mass range. 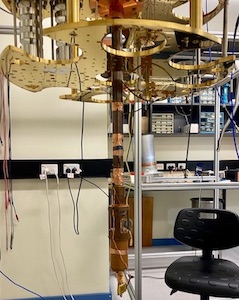 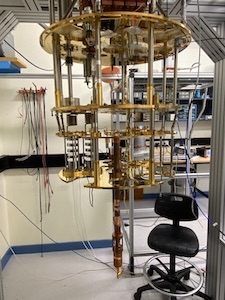 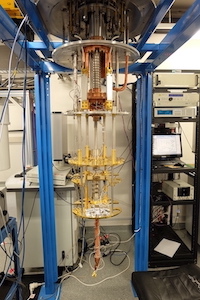 The ORGAN Experiment uses a type of detector called an axion haloscope.  The experiment takes place inside a dilution refrigerator, which cools the detector down to very, very low temperatures (a few thousandths of a degree above absolute zero), to reduce the background noise and therefore increase the chances of detecting axion dark matter.

“The idea behind a haloscope is to try and detect the dark matter by converting it into well-known particles called photons, which are like tiny little flashes of light.

“By engineering the correct conditions, we can force some of the axion dark matter entering our detector to convert into these tiny flashes of light, which we can then detect.

“When we don’t see any little flashes, as was the case this time, we instead place exclusion limits, where we rule out axions that our experiment would have been sensitive to.

“Then, we tell the rest of the dark matter community “no dark matter here” and move on to search for axions of a different mass.”

Mr Quiskamp said the team hope to begin their next search later this year.

“We’ve shown that high-mass axion searches are possible, but a lot of work is needed to search in other relevant mass ranges.”

Dr McAllister said the first results from ORGAN are a big step for Australian research in this space.

“With other dark matter experiments, such as SABRE and UPLOAD, coming online in the next few years, Australia is set to be a key player in the hunt for dark matter,” he said.

This research was supported by funding from the Australian Research Council (ARC) and the ARC Centres of Excellence for Engineered Quantum Systems (EQUS; equs.org) and for Dark Matter Particle Physics (CDM; centredarkmatter.org).