Congratulations to the winners of the 2021 EQUS Quantum Art Competition

We’re excited to announce the results of our 2021 Quantum Art Competition!

The winning entry—an imagination of concepts from quantum physics as characters from a fantasy world or story—is by Toby Davis.

The People’s Choice Prize, as determined by public vote, goes to Francisco Coronado.  Francisco’s entry is an abstract portrayal of a dilution fridge used to maintain a quantum computing chip.

Toby receives AUD$500 for the winning entry and Francisco receives a prize of AUD$100 as the People’s Choice.

The winning entry was determined by our panel of judges:

Alan said that Toby’s entry was compelling and highly innovative.  “The caption was incredibly enjoyable and creative, it made clear that great thought had gone into the art.”

Jennifer said she was impressed by all the entries.  “It was wonderful to see the range of media submitted, and everyone’s creative approach!”

You can find all the finalists here.  Thanks very much to everyone who entered and congratulations to Toby and Francisco!

More about our judges…

Jennifer Burns is an artworker on the science journal Nature and has recently completed a Master’s in Creative Writing.  As a photographer, she works with analogue film to make documentary series about obsolescence, death and memory.

Alan Duffy is the Director of the Space Technology and Industry Institute at Swinburne University of Technology, working on dark matter, galaxy formation and cosmology.  He is the Lead Scientist of the Royal Institution of Australia, home of Cosmos magazine.

Christina Giarmatzi is a Postdoctoral Research Associate at University of Technology Sydney, investigating non-Markovian noise in quantum devices.  She is a passionate photographer, who also skates, surfs and plays guitar.

Winner: If Things from Quantum Physics were Fantasy Characters, by Toby Davis 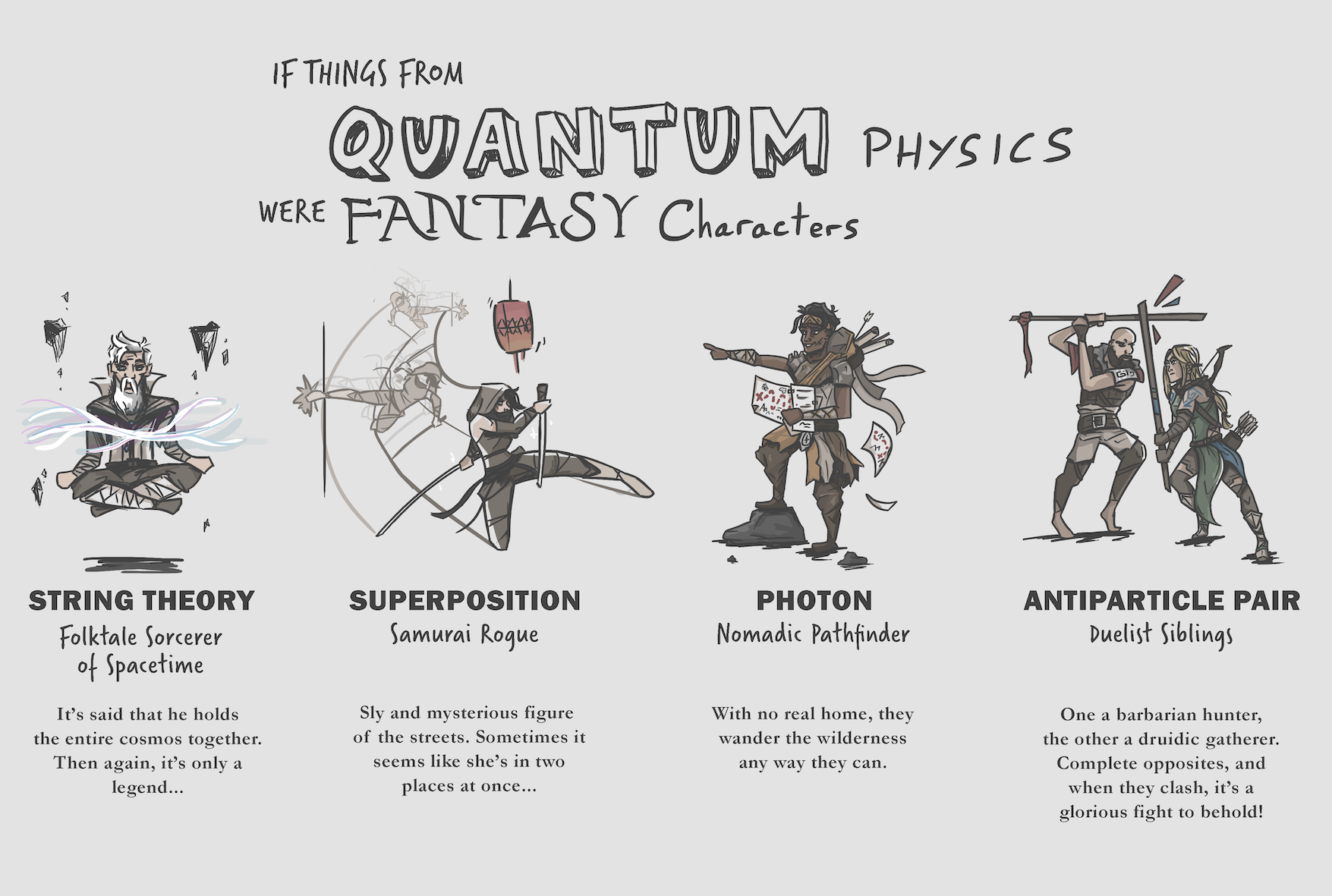 In this art piece, I have tried to imagine concepts from quantum physics as if they were characters from a fantasy world or story.  I think that often quantum physics has some very complex ideas, which can be hard to visualise and wrap your head around (things like superposition and wave-particle duality come to mind!).  This is why I wanted to think about them in a very different way, one that sparks imagination, but also carries the key ideas behind these scientific concepts.  Here, I have designed four characters based on string theory, superposition, photons, and antiparticle pairs.

When translating these different quantum physics concepts into fantasy characters, I tried to encapsulate the key ideas behind them.  For instance, when designing the character for superposition, I wanted to convey the idea of being in two places at once.  This led me to settle on a sly and mysterious ninja-like character who can nimbly maneuver her way around the street, almost as if she was in two places at once.  I imagine her being a bit of an elusive street thief, who is both skilled and able to evade potential enemies.

The other characters are also based on aspects of their respective concepts.  The photon is a nomadic pathfinder, who is always on the move and forging paths through the wilderness.  Similar to how photons are always moving at the speed of light, and travel in straight paths across the universe.  String theory’s character is a sorcerer who, according to legend, controls all of space and time.  However, much like actual string theory, which is still unproven, the sorcerer remains a folktale.  Lastly, I imagined the antiparticle pair as a sibling rivalry between two skilled duelists.  Just like how antiparticle pairs (which are complete opposites) can, and often, annihilate each other.

I enjoyed designing and creating these characters, and I hope that they can help people view quantum science in a new light and from a different and unique perspective. 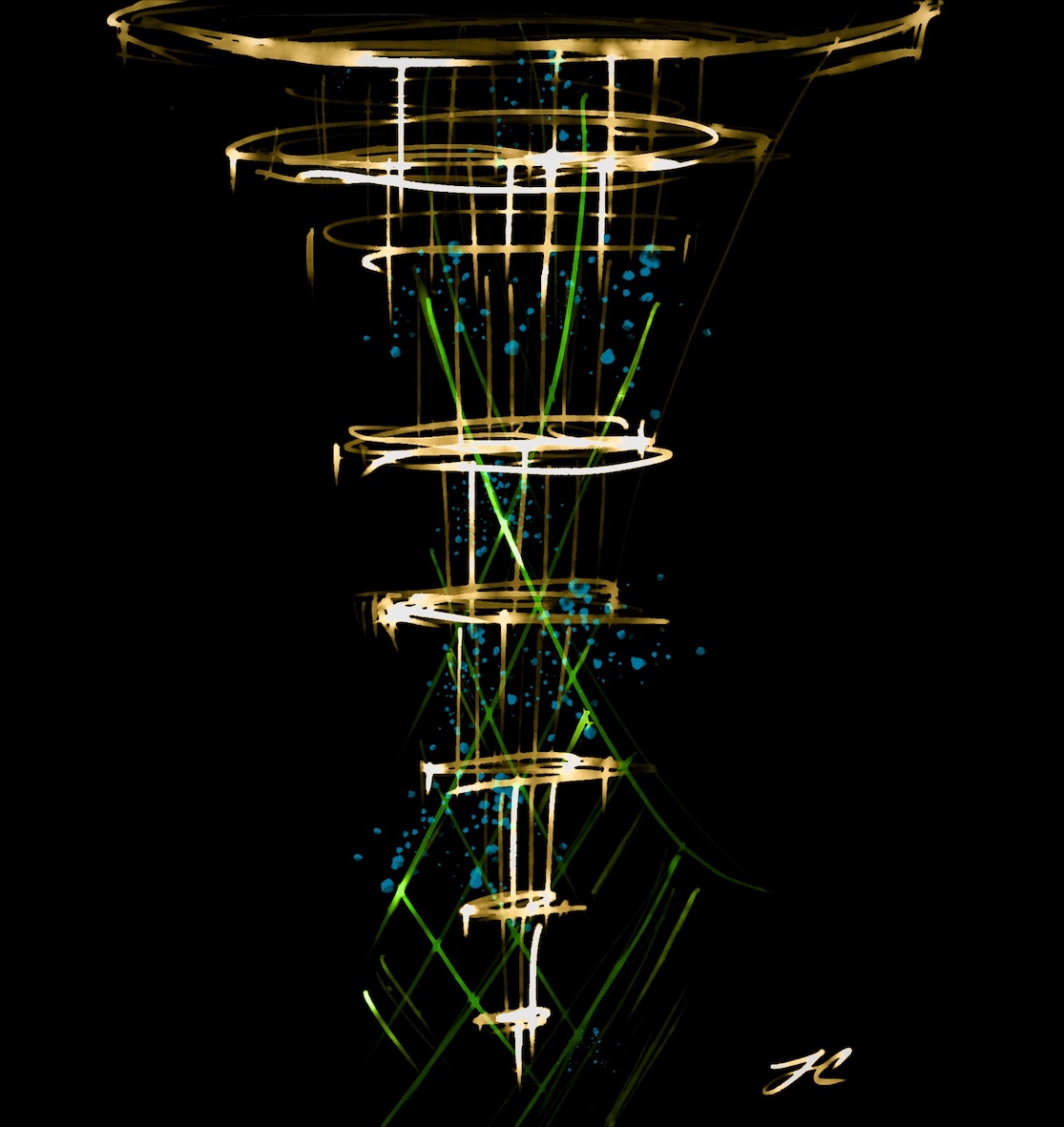 This is an abstract portrayal of a dilution fridge used to maintain a quantum computing chip below sub-kelvin temperatures.  The colors used in the drawing illustrate the gold used to sustain the conductivity while the blue is used to indicate extreme operating temperatures.  The black color is used to give a sense of the void in the isolation of single electrons.  Green is a typical color that is often employed in the PCB design of chips which is also relevant in single electron devices.