A project led by EQUS CI Professor Matthew Davis has provided insight into the behaviour of rotating superfluids.

The results are published in Physical Review Research.

An Australian-led study has provided new insight into the behaviour of rotating superfluids.

A defining feature of superfluids is that they exhibit quantised vortices—they can only rotate with one, or two, or another integer amount of rotation.

Despite this key difference from classical fluids, where vortices can spin with any strength, many features of the collective dynamics of vortices in both classical and quantum fluids are similar.

However, in this study the FLEET team at the University of Queensland demonstrate one stark difference in the behaviour between classical and quantum fluids.  The authors consider the expansion of vortex clusters to show that for any initial arrangement of quantised vortices, a ‘Rankine’ super-vortex will form.

“The behaviour of many vortices in a superfluid is often chaotic and difficult to describe theoretically,” explains lead author Oliver Stockdale. “Our study overcomes this challenge by providing an exact solution to the vortex dynamics.”

The solution shows that a cluster of chiral vortices (vortices which all spin in the same direction) expands to form a constant density distribution that has a shape similar to a top hat. Such a distribution of vortices, known as a Rankine vortex, is forbidden in classical fluids due to their viscosity.

“Superfluids have zero viscosity and can support a Rankine vortex”, explains Oliver. “The striking result of this finding is that all initial distributions of vortices, regardless of how they are arranged, expands to form a Rankine vortex. This long-time equivalent behaviour is known as the universal dynamics and demonstrates the mechanism for how a superfluid dissipates its energy via quantised vortices.” 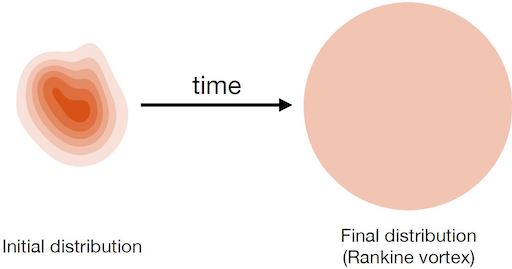 The authors employ a recently developed theory that describes the vortices themselves as a fluid.

“Just as hydrodynamics describes the behaviour of many fluid particles, it can be used to describe the motion of many vortices, which form a ‘vortex fluid’ within the ordinary fluid,” says co-author Matt Reeves.

“However, the vortex fluid exhibits additional ‘anomalous’ stresses; these extra forces arise due to the nature of the vortices that restrict their rotation to be quantised.

The anomalous terms give unusual fluid behaviours, including a viscosity which is negative. Essentially, the negative viscosity causes the exact opposite behaviour to a normal, classical fluid – it steepens the vortex density gradients, until the distribution becomes a Rankine vortex.”  An example expansion within vortex fluid theory can be seen in Fig. 1, where an initially non-uniform vortex fluid expands to form a Rankine vortex.

To support their theoretical findings, the authors simulate the dynamics of thousands of vortices computationally. As opposed to describing the vortices as a fluid, these simulations consider each vortex as an individual entity. As with the vortex fluid theory, the authors find that any initial vortex distribution expands to form a Rankine vortex. An example of the numerical result can be seen in Fig. 2, where a Gaussian initial distribution expands to form a Rankine vortex.

Finally, the authors analysed data from an experiment that observed the expansion of a vortex cluster in a real superfluid, which was created using ultracold rubidium atoms.

“Whilst the vortex fluid theory assumes there are many vortices present, the experiment could only create approximately eleven vortices. Despite the low vortex number, there was evidence that the Rankine vortex emerged after the cluster expanded,” explains project leader Prof. Matthew Davis. The experimental vortices can be seen in Fig. 3, as highlighted by the white circles.

Not only did this study demonstrate the first solution to the complicated vortex fluid theory, it provided the theory’s first experimental test. The experiment quantitatively predicted key features of the theory and demonstrated a platform to further test properties of the Rankine vortex, such as predictions that it supports an analogue fraction quantum Hall effect.