The annual event, held virtually in 2021, provided a platform for the next crop of scientists to listen to and ask questions of 70 Nobel Laureates, as well as discuss and network with their peers from around the world.

Dr Sachkou, from UQ’s School of Mathematics and Physics and the ARC Centre of Excellence for Engineered Quantum Systems (EQUS), said the opportunity to mingle with the world’s brightest young scientists and Nobel Laureates was one he could not pass up.

“Young scientists are only allowed to participate in the Lindau Nobel Laureate Meetings once in their lifetime, unless they win a Nobel Prize themselves,” he said.

“So, this was literally a once-in-a-lifetime opportunity.”

The 70-hour programme was held over five days and opened the floor for discussion of some of the most pressing global issues between Nobel Laureates and attendees.

“There were plenty of opportunities to exchange ideas with Nobel Laureates on topics ranging from dark matter, black holes, and the intricate workings of the human brain, to the coronavirus pandemic, climate change, and science communication,” Dr Sachkou said.

“Personally, I asked many questions to Nobel Laureates in a chat and live on the virtual stage, and talked to some of the laureates one-on-one within their open exchange sessions.

“These sessions gave young scientists the opportunity to directly chat with laureates on any topic, from their careers and histories of their Nobel discoveries to state-of-the-art science.

“Young scientists were even able to discuss their own research with Nobel Laureates and get some insights.”

Dr Sachkou believes the value of the meeting was its facilitation of collaborative thinking and discussion between young scientists and Nobel Laureates.

“I believe that one of the best ways to advance science is through an exchange of ideas,” he said.

“The Lindau Nobel Laureate Meeting is a unique setting for learning from Nobel-Prize-winning minds and for sharing knowledge and ideas with some of the brightest scientists in the world.

“Young researchers are exposed to new ideas and views not only from Nobel luminaries, but their peers, and have a unique opportunity to expand their academic network, establish new collaborations with bright scientists from across the globe, and inspire future interdisciplinary research.

“I regard science communication as one of my main missions as a scientist and I look forward to sharing my ideas and knowledge, which I’ve acquired at the meeting, through future outreach events.”

Australian postdoctoral researchers and PhD candidates who were invited to attend were nominated by the Academy and selected by the Council for the Lindau Nobel Laureate Meetings.

Those invited to this year’s digital meeting received a grant to enable their attendance through the support of the Science and Industry Endowment Fund and have also been invited to attend future in-person meetings for their respective disciplines.

“That means that I will be attending the next Lindau Nobel Laureate Meeting dedicated to physics, which is scheduled for 2024 – so I will likely be lucky enough to experience a once-in-a-lifetime twice,” Dr Sachkou said. 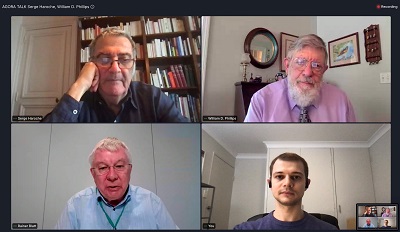