EQUS researchers are finalists in the 2020 Australian Museum Eureka Prizes—the ‘Oscars’ of Australian science—for their work on quantum turbulence.

The Australian Quantum Vortex team, led by EQUS CI Professor Warwick Bowen, is one of three finalists for the UNSW Eureka Prize for Scientific Research.

Professor Bowen said his team was ecstatic to hear that its work on quantum turbulence was being recognised.

“It’s been a remarkable year for us as this is a culmination of more than a decade of research across three universities,” Professor Bowen said.

“Our work observes, for the first time, the microscopic origins of large-scale structures in quantum turbulence.

“We all witness turbulence in our everyday lives, in storms, in the ocean and atmosphere.

“Though how these structures form and persist is not well understood—indeed turbulence is widely considered the most important unanswered question in classical physics.

“This research provides a new path to understand turbulence, allowing us to create and evolve turbulent systems at microscale dimensions in the lab, which could form the basis of new quantum technologies, such as precision inertial sensors.” 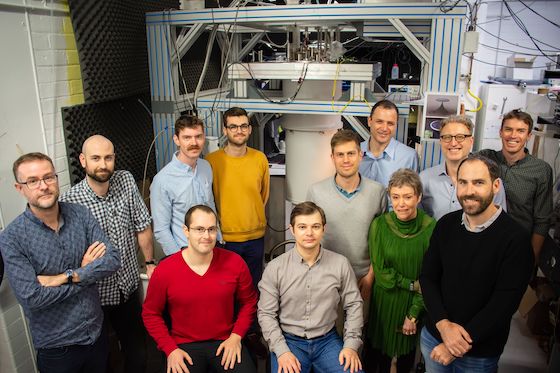 Turbulence is a ubiquitous phenomenon that causes giant vortices to form, influencing global weather, flight and even galaxies.

The Australian Quantum Vortex team has developed pioneering laser technologies to observe the microscale origins of turbulence for the first time.

Their results verify 70-year-old predictions that these vortices emerge in quantum fluids, and have important implications for the design of future quantum technologies.

The discovery is captured in three key 2019 papers, published in Science:

The research was supported by EQUS and FLEET, together with a grant from the US Army Research Office.

The Eureka Prize winners will be announced on Tuesday 24 November.