50 distinguished scientists have today been elected as Fellows of the Royal Society and 10 as new Foreign Members for their outstanding contributions to science such as pioneering machine learning systems, revealing the chemical origins of life, and discovering how humans operate on a 24-hour cycle. 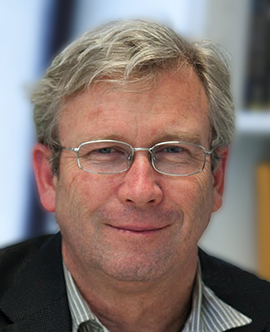 The ARC Centre of Excellence for Engineered Quantum Systems' founding Director Professor Gerard Milburn was elected as a Fellow in recognition of his significant contributions to physics over the past decades (full bio below).

Venki Ramakrishnan, President of the Royal Society, says: “Science is a great triumph of human achievement and has contributed hugely to the prosperity and health of our world. In the coming decades it will play an increasingly crucial role in tackling the great challenges of our time including food, energy, health and the environment. The new Fellows of the Royal Society have already contributed much to science and it gives me great pleasure to welcome them into our ranks.”

Professor John Sutherland is distinguished for his pioneering studies in understanding the chemical origins of life. His proposed scenario is the first unifying theory which has been experimentally proven to demonstrate that all of the necessary subcellular precursors to life can be assembled simultaneously in a prebiotic world. Also based at the MRC Laboratory of Molecular Biology, Dr Andrew McKenzie, has made breakthroughs in understanding the innate regulatory pathways that control asthma and allergy through the characterization of novel immune-regulatory type-2 innate lymphoid cells.

Climate scientist Professor Gabriele Hegerl, University of Edinburgh, has made key advances in the critical observations of climate change. Her rigorous approach had helped scientists systematically distinguish between different possible explanations for the observed recent warming and thus to quantify the contribution to the warming from human-induced factors. She was also first to use multi-century climate reconstructions to estimate the sensitivity of climate to changes in the concentration of atmospheric carbon dioxide.

Professor Stafford Lightman, University of Bristol, has fundamentally changed our understanding of the hypothalamic-pituitary-adrenal axis, which control our 24-hour body clocks. His work is making major impacts on the way we treat stress related disease including clinical depression and anxiety disorders, as well as life-debilitating illnesses like Cushing’s Disease.

Professor Nicola Spaldin, based at ETH Zurich, is an international leader in the field of Materials Theory, best known for her contributions to the field of multiferroics, reviving the field by identifying the basic reasons behind the apparent incompatibility between magnetism and ferroelectricity, and proposing new routes to overcome it. Sir Nigel Shadbolt has been central to the development and practical implementation of Open Data policy, helping establish the UK as a world-leader in this field.

Dr Marcia McNutt has been made a Foreign Member for her distinguished career in geophysics research, including her time at the US Geological Survey, where she was involved in the Deep Water Horizon oil spill, and developed new approaches to dealing with environmental disasters. In 2013 she became the Editor-in-Chief of the journal Science, and in 2016 became the first woman to be made President of the US National Academy of Sciences.

Also joining the list of Foreign Members is American immunologist Dr Max Cooper, who identified T and B cells and their role in human disease. Professor Hideo Hosono is a distinguished Japanese scientist whose work on oxides is used now used as switches in most smartphone displays.

Professor Whitfield Diffie is unique among cryptographic researchers in combining the methods of a mathematician, a historian, and an investigative reporter; he discovered the technologies we now call public-key cryptography and digital signatures, which have now become ubiquitous in the Internet infrastructure.

Lord David Neuberger of Abbotsbury has been made an Honorary Fellow. He is currently President of the Supreme Court of the United Kingdom.

The Fellowship of the Royal Society is made up of the most eminent scientists, engineers and technologists from or living and working in the UK and the Commonwealth.

Some statistics about this year’s intake are as follows:

Gerard Milburn obtained a PhD in theoretical Physics from the University of Waikato in 1982 for work on squeezed states of light and quantum nondemolition measurements. In 1994 he was appointed Professor in Physics at The University of Queensland. In 2011 he became the founding Director of the Australian Research Council Center of Excellence for Engineered Quantum Systems.

He has worked in the fields of quantum optics, quantum stochastic processes, atom optics, quantum control and most recently in engineered quantum systems including opto mechanics and superconducting quantum circuits. In 2001, together with Knill and Laflamme he published a scheme for quantum computing with photons, known as the KLM scheme, that had a major impact on the experiments in quantum optics.

Gerard Milburn is a Fellow of the Australian Academy of Science and the American Physical Society. He is the author of five books including Quantum Optics (with Dan Walls), Quantum Measurement and Control (with Howard Wiseman) and Quantum Optomechanics (with Warwick Bowen).