An international team of quantum physicists today published in Nature Communications the first test of Einstein’s equivalence principle for atoms whose mass was in a quantum superposition state.

Einstein’s equivalence principle plays a vital role in our understanding of gravity and space-time. The principle implies that the total inertial and gravitational mass of any object are equivalent, which means all bodies fall in the same way when subject to gravity.

To demonstrate this effect, during the sixteenth century Italian scientist Galileo Galilei reportedly dropped two spheres of different masses from the Leaning Tower of Pisa. The team of physicists conducted a quantum analogue of the Leaning Tower test.  The novel approach to quantum tests of Einstein’s equivalence principle was first proposed by ARC Centre of Excellence for Engineered Quantum Systems researcher Dr Magdalena Zych and University of Vienna and the Austrian Academy of Science researcher Professor Časlav Brukner. 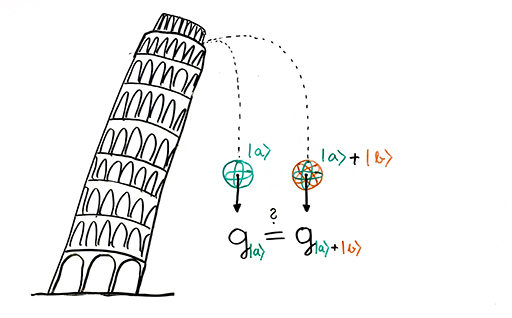 Dr Zych said that the test relied on a unique quantum feature: Superposition.

“In relativistic physics the total mass of a system depends on its internal energy. In quantum theory, a system can occupy two or more different energy states ‘at once’. This is called quantum superposition, which means a quantum system may occupy different mass-energies in superposition,” Dr Zych said.

An experimental team led by Professor Guglielmo Tino of the University of Florence and INFN designed and realized the new test.

The spheres in Galileo’s Leaning Tower example were replaced by the gravitational acceleration of rubidium atoms. The tower was replaced by a scheme developed by Professor Tino’s team that is based on Bragg atom interferometry.

The experiment confirmed the validity of the Einstein equivalence principle for quantum superpositions with a relative precision of a few parts per billion.

The collaboration included experimentalists from the University of Bologna and the European Space Agency.

The scheme used in the experiment can lead to the development of new sensors with a variety of applications: studies of volcanic eruptions and earthquakes, searching for mineral deposits, navigation on Earth and in space, or high-precision measurements of time, frequency, accelerations, and other.