Quantum physicist Dr Jacqui Romero has been recognised as one of the 40 Under 40 Most Influential Asian-Australians for 2020.

This prestigious award celebrates Dr Romero’s achievements and recognises her as a young leader in the field of science.

“I am honoured to be included in this year’s elite list,” Dr Romero said.

“I do science because it’s fun, this kind of honour is like the cherry on top.  I think it is important too, especially at a time when some parts of society cast Asians in a bad light.”

Asian-Australians represent at least 12% of the Australian population but are considerably underrepresented in leadership positions.  Sadly, racism and discrimination towards Asian-Australians is also on the rise, partly as a result of the current pandemic. 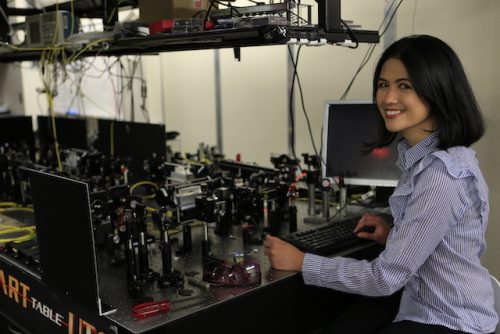 Dr Romero is a Chief Investigator at the ARC Centre of Excellence for Engineered Quantum Systems (EQUS) and Senior Lecturer at The University of Queensland, working in the field of experimental quantum information.

She started her science career in the Philippines, before moving to Scotland and now Australia.  Her research is helping to increase information security, using the shape of light as a carrier of quantum information.

This is not the first time Dr Romero has been formally recognised for her contribution to science.

In 2017, she was one of four L’Oréal–UNESCO For Women in Science Fellows in Australia; in 2018, she won the Ruby Payne-Scott Medal from the Australian Institute of Physics and a Young Tall Poppy Award.

Last year, she was awarded a Westpac Research Fellowship and a L’Oréal–UNESCO For Women in Science International Rising Talent—one of fifteen worldwide.

The 40 Under 40 Most Influential Asian-Australians for 2020, including the overall and category winners, were announced today at the Asian-Australia Leadership Summit.

The awards are a joint initiative of Asialink at the University of Melbourne, the Australian National University, Johnson Partners and PwC Australia.